⚡️ Microservices and the Rise of Micro Frontends

Microservices have exploded in popularity within the past five years or so, and along with that we've seen an interest in applying these concepts to our frontend applications.

The definition of a microservice can vary from person to person, but the premise is quite simple--an architectural style consisting of a collection of distinct, autonomous services, each responsible for a specific thing.

But what exactly is it that caused the popularity of microservices in the first place? And can that help us better understand when and how to use micro frontends?

The Evolution from Monoliths #

Monoliths aren't as bad as people make them out to be, and many big organizations like Etsy have been pretty successful with them.

The problem with monoliths is that people will tend to abuse them. Even with solid practices like following a modular structure and establishing boundaries around those modules, it's just too easy to sneak around those boundaries. Eventually, they can become ginormous and a nightmare to maintain.

Just imagine for a second that you are a very healthy eater and your goal is to lean up by the summer time. You've bought your bikini, you've bought your carrots--or whatever it is that healthy people buy--and you're ready to rock. There's just one problem. Your best friend is your roommate. The same best friend that bakes pastries and desserts for a living.

You know you're disciplined, but you're a bit worried that smelling freshly baked bread on Sunday mornings and chocolate cake in the evenings is going to throw you off your target. It's just too easy.

You might start incorporating some of your friend's less healthy ingredients into your food, and they might start using your ingredients around the house for their recipes. Nobody is going to want to buy your best friend's cakes if they're going to start substituting flour for powdered quinoa. Actually, I'm not sure I even want to be friends with them anymore. 😐

But if your best friend lived just across the street, it'd make it a lot less likely that you'd give into temptation. You'd have to actually get dressed and go out of your way to go after that pack of cookies, instead of making do with the healthier snacks you already have at home.

You and your roommate sharing a house is the equivalent of two independent services sharing the resources of a monolithic application.

Healthy living is your objective, and crafting tasty treats is their objective. Putting the two of you together in a single space is likely to allow bleeding across the boundaries between the both of you, and neither of you will be as effective in reaching your goals.

Software isn't all that different. Our goal should be to set ourselves up to fall into the pit of success. And, indeed, the next step in the evolution of the monolith was all about slicing up our concerns.

Service-oriented architecture, or SOA, aims to remediate the problem of tightly bound monoliths by breaking them up into smaller chunks, or services, that provide some kind of business functionality.

This, in turn, allowed services to use different languages, and created a more polyglot world for programmers. SOA is commonly associated with web services, like SOAP. That's because web services are commonly the way SOAs are implemented, so that the services can communicate with one another. 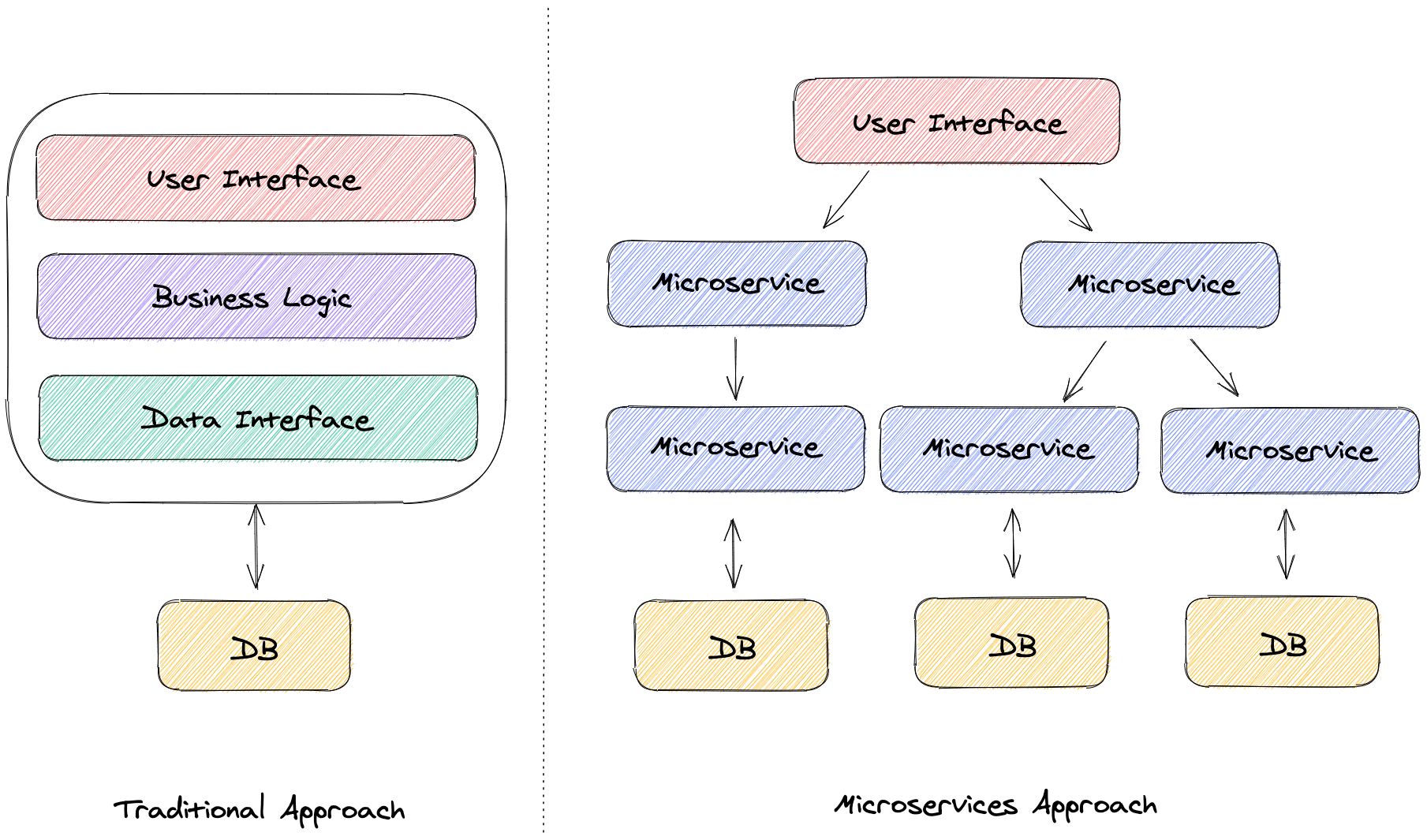 NOTE: Both approaches can come in a variety of forms; this is a basic example for illustration only.

So, microservices make crossing boundaries a bit more difficult to do, because, when implemented correctly, they act as separate entities that encourage us to stay in our own lane.

The goal in many systems is to create flexibility and well-isolated components that are independent of one another, but what exactly does that mean? Are we talking about dividing things by technical concern or by business concern?

But we haven't addressed one of the fundamentals in this system, and that's the organizational design. The first principle from SOLID, the Single Responsibility Principle (SRP), states that a class should only have a single responsibility.

Robert Martin, the creator of this principle, later offers a different wording to make it a bit easier to understand:

The Single Responsibility Principle is about people. The goal of following the principle is to limit the impact of inevitable change.

SRP aims to help us approach our code with business concerns as the focal point, and we do that by grouping things based on why they change and how often they change. Things we expect to change for different reasons might include use cases and the user interface.

When we do that, we start to slice vertically into those horizontal layers for each use case. Each slice has all the technical components in it that it needs to fulfill its responsibility, much like Bounded Contexts in Domain-Driven Design.

This also means that each system will have its own data store, if it needs one at all. It's the equivalent of your best friend moving across the street. You stop relying on whatever she's brought back from the supermarket. And you start using your own peas and potatoes.

The important thing to understand here is that the vertical boundaries I'm referring to are directly related to the business concerns. If those business concerns are to reflect Conway's Law, then it stands to reason that it is also representative of the organizational structure as well.

Conway's Law: Any organization that designs a system (defined broadly) will produce a design whose structure is a copy of the organization's communication structure.

So, while I'm referring to vertical boundaries and slicing of software and teams, in terms of infrastructure it's quite different, and microservices will tend to be scaled horizontally. I think that distinction can be helpful to understand.

What does this mean for micro frontends? #

Earlier I mentioned that micro frontends are essentially the same as microservices, except that they also include the user interface. Well, sort of.

The idea of micro frontends is that your application is logically broken down into smaller, independent parts that are organized by team or functionality and later composed into a single UI.

How you choose to integrate these systems to get from pieces to an entire whole can vary. Following that, the final result doesn't change: from the user's perspective there is only one user interface. That it was broken into itty bitty pieces before they got there is something they just don't care about.

Ensuring that teams working independently with potentially different technologies and processes still results in a single cohesive product is, indeed, one of the challenges specific to working with micro frontends.

We want to make it more difficult for us to step on each other's toes, but we also need to prevent ourselves from over-engineering and creating completely fragmented systems or siloed teams. It's a balance that needs to be reevaluated continuously.

Consider starting out with a monolith that follows the principles of SOLID and Separation of Concerns. You can always grow the system into independent units that can be deployed on their own, and eventually switch to micro frontends. As we've learned in the past, a simpler system will almost always be easier to work with.